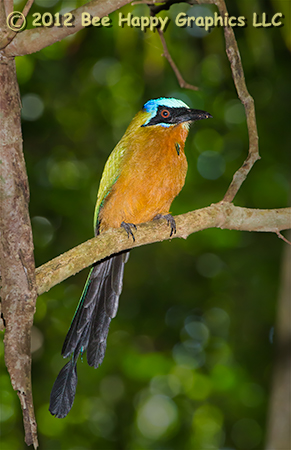 Nancy took this image on a 10-day trip led by Brian Rapoza for the Tropical Audubon Society to Trinidad and Tobago.

Up until just before this picture was taken, this bird was named the blue-crowned motmot, as were the russet-crowned motmot, the Amazonian motmot, the Blue-capped motmot, the Andean motmot, Lesson's motmot, and the Whooping motmot. Now that it has been declared its own species, it is endemic to Trinidad and Tobago, where it is the only motmot species. It is more commonly seen in Tobago. Called the "King of the Woods", this is one of the largest species of motmot, with an overall length of 18 inches, about half of which is the racket-tipped tail. The length of one wing is just over five inches. It can be found in the rainforests, where is stays fairly low and well-hidden. Often it is only given away by the tick-tock pendulum motion of its tail. It can also be seen on the Trinidad and Tobago five-dollar bill.

This is not a social bird. It may be seen in loose pairs, but not in large flocks. It eats insects, snails, and small lizards, but will take fruit. Its nest will be in tunnels in banks, where it will have three or four white eggs.