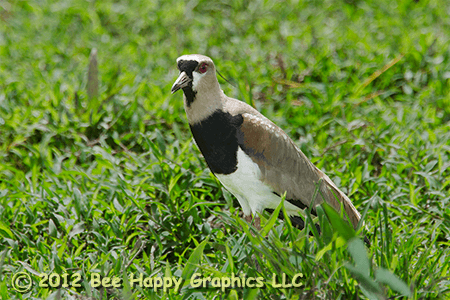 Nancy took this image while on a trip led by Brian Rapoza for the Tropical Audubon Society to Trinidad and Tobago.

This is a conspicuous wading shorebird about 14" long and weighing 9 to 15 ounces. They are common and widespread in all of Central snd South America, except for the most densely forested areas of the Amazon and the highest part of the Andes. It reached Trinidad in 1961 and Tobago in 1974. It is the national bird of Uruguay, where it is called tero. Its loud, grating call is a strong clue of its presence.

This is the only wader in South America that has a crest. Not shown in this picture are their coral-colored carpal spurs, bony extensions under the wings that they use to fight birds of prey and intimidate foes. They are often seen in pairs or small flocks in open habitat, usually near water but also in dry pasture.

Southern lapwings eat mostly insects and small invertibrates. They use a run-and-wait technique, usually at night. They breed cooperatively in social groups consisting of the breeding pair and one or two young from the previous breeding season.