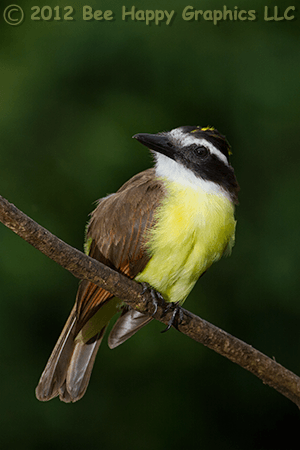 Nancy took this image while on a trip led by Brian Rapoza for the Tropical Audubon Society to Trinidad and Tobago.

This is one of the most widespread flycatchers in the Western Hemisphere. In the United States, it can only be found in southernmost Texas. It can also be found along both coasts of Mexico and Central America and all of South America east of the Andes except for the very southern end of Argentina, including Trinidad. It was also introduced into Tobago in 1970.

Great kiskadees are omnivorous, but often eat small fish and snails. They hang out in streamside thickets, groves, orchards, and towns. In the tropics, they occur in many semi-open habitats, but they avoid dense, unbroken forests.

These birds are monogamous and defend a territory. They are aggresive, boldly chasing larger monkeys, raptors, and snakes away from their nests. Both parents build the large domed nest of grasses and small twigs. The female lays 3-4 eggs and is the ony one to incubate, but the male guards the nest when she needs to go feed. The chicks hatch in up to 17 days and fledge in at least 17 more.