Sandhills On A Stroll 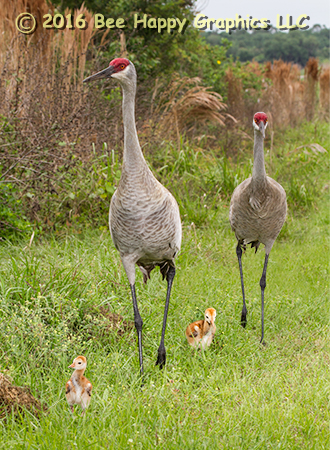 This image of a new sandhill crane family (Grus canadensis pratensis) was taken in late March at Circle B Bar Reserve. We learned about this reserve from visitors to our booth at a nearby art festival (and it is where Nancy saw her first bobcat).

We were on a long narrow stretch of trail when we spotted this family ahead. Nancy gave them as wide a berth as possible as she moved to get in front of them and then kneeled several yards ahead to set up a shot. In no time she had to get up and move further ahead because these sandhills weren't dawdling. This process had to be repeated several times.

In another example of how we learn from our visitors, we had a framed version of this image hanging in our booth when a lady asked Nancy if she knew how old these chicks were. Nancy, being born, raised, and living in Miami, which is south of the sandhill crane's range, was not intimately familiar with their life history even though we have seen plenty of sandhill cranes on our travels throughout the state. She guessed the chicks were maybe two weeks old. Turns out they are only about two days old. Apparently the chicks hit the deck running and grow fast.

Sandhill cranes mate for life and start breeding when between two and seven years old. They live around twenty years. Females usually lay two eggs, but typically only one nestling survives to fledge. Juveniles will be with their parents up to ten months.

For different views that include sandhill cranes, check out these images:
Sandhill Cranes and
Whooping Crane with Sandhill Cranes.