Because things appear to get smaller as they get further away, each set of parallel lines will converge at some “vanishing” point. As you may remember from taking art in elementary school, vanishing points were used to make your drawings of boxes look more realistic than the boxes of your classmates, and could also work with rectangular-prism-like buildings with straight and parallel lines. Nancy & I don’t do cityscapes, so today all of our parallel lines will be imaginary construction lines, but the technique is every bit as powerful, if not more so. First I will explain the basic technique, which should work with all editing software. Then I’ll show how the vanishing point filter in Photoshop could make your life a little easier.

For our example, we will be using a picture Nancy took in Paynes Prairie Preserve State Park near Gainesville in early 2009 of some of their wild horses walking down the trail (Photographic details: Canon EOS 30D camera w/ EF 100-400mm f/4.5-5.6L IS USM lens set at 285mm. Camera was on f/9 for 1/640 sec at ISO 800.). Since one cannot have their subject walking out of the picture, we have two choices; we could add some grass below the feet of the lead stallion using either the clone stamp or content-aware fill (which doesn’t always work well for me), or we could try moving that horse back toward the rest of the harras. That’s what we’ll do. To keep him from looking like a giant next to the others, we will use vanishing points to help resize him. 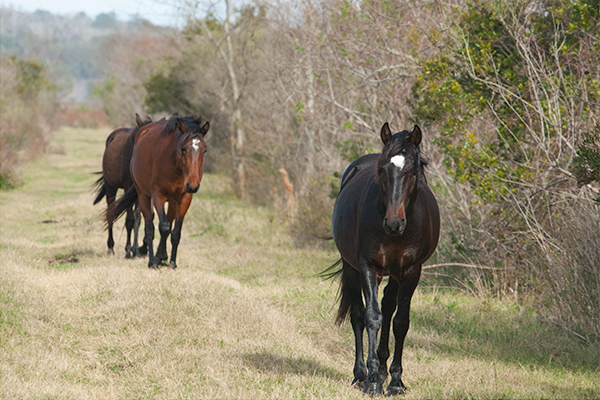 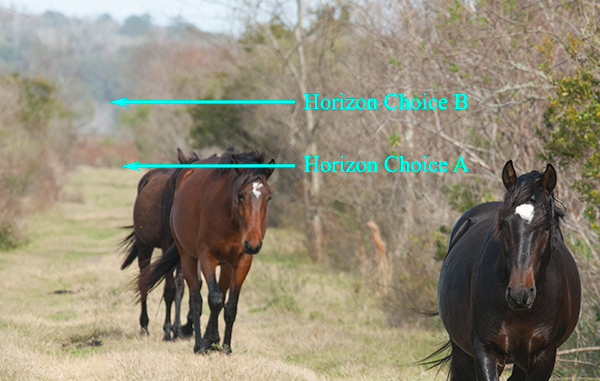 It is quite possible that the vanishing point and/or your horizon may be just out of the picture. In that case, increase the canvas size so that you will be able to draw both on the canvas. Make a group, call it something like “find horizon”, and select it before making construction lines so it will be easier to delete them en masse when no longer needed.

The trail seems to be an obvious choice for horizontal parallel lines, but in this case, it appears to have a slight curve to the right halfway up to the horizon. Using the bottom half of the trail, the right edge of the trail (Line C) and two worn ruts (Lines D & E) converge just to the left of the picture’s left edge. We’ll put the horizon at that height. I drew the horizon in green on a separate layer outside of the previous group. From the upper half of the trail, the left edge of the trail (Line F) and the same rut as Line E (now Line G) would represent another set of horizontal parallel lines converging to another vanishing point on the same horizon. That they turn out to be at the same level as the first vanishing point gives us some confidence. Keep in mind, parallel line interpretation in the field is not an exact science. Also, the more things you have to estimate, the less precise your final answer will be. That is why I made my construction lines fatter. We will need the horizon line very soon; all the blue lines (ideally in one group) can be deleted now. 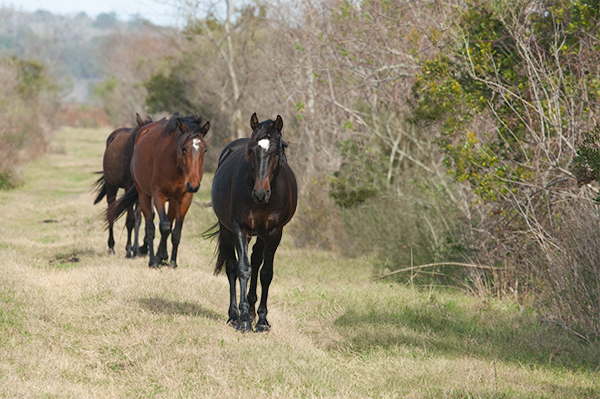 This filter isn’t as much of a shortcut as I had imagined*, but it does save you from doing the math and changing the horse size manually. It will involve making three attached planes with the Vanishing Point Filter and pulling the horse around.

Return to Step 11 of the first set of instructions. Again, congratulations!