It seems like it would be easier just to make the Reference plane described in Step 9, stretch it to the left past the destination location for the horse, and just slide the horse back in a fashion similar to Step 12. This doesn't work too well because the horse gets skinny. 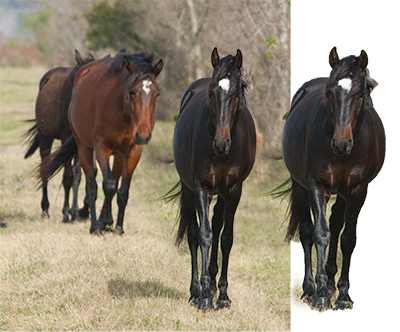 The middle horse was moved using the One-Plane method. The stallion on the right was moved as I describe in the article, which gives the same results as described in the "The Old Way" section. The reason has to do with perspective and geometric distortion, and is somewhat similar to the distortion caused by using different lenses at different distances to the subject as described by Daniel Baker in his blog Face distortion is not due to lens distortion. One day, I will have pictures and graphs to better explain this phenomenon.