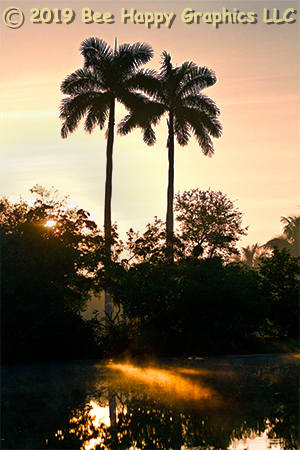 In 1936, Fairchild Tropical Botanic Garden was established by Robert Montgomery and named for his friend and well-regarded botanist David Fairchild, who introduced over 200 thousand exotic plants to the United States, including soybeans, pistachios, mangos, and dates, starting at the end of the nineteenth century. The 83-acre facility was opened to the public two years after being established. This photograph was taken less than three quarters of a century after that.

This near-monotonic image shows the sun shining through the silhouetted shrubs to light up the mist on the pond just minutes after sunrise.

The camera was on aperture priority and one-third of a stop of exposure compensation was added to bring out a little bit of detail in the foreground. We were a little slow adjusting other parameters like ISO to keep up with the rapidly increasing light of sunrise (which resulted in more noise in the raw file than absolutely necessary). This happened six years before I discussed taking fullest advantage of modern digital capabilities (see Stop Thinking Like A Film Photographer!), but even today we still fall back on familiar habits.