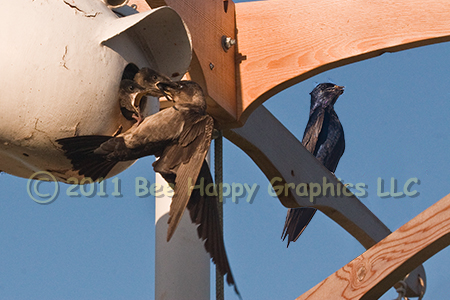 This picture was taken in our back yard. Only the adult male purple martin appears purple, and only after his second year. Females and immature males have a lighter colored front.

The purple martin is one of our native songbirds. Ours fly in to south Florida at the end of January to raise four to six young. The range of our eastern subspecies (Progne subis subis) covers the entire United States east of the Rockies and even into central Canada. Those migrating to the northern end of that range arrive several weeks later. In early August ours all leave for the Amazon basin.

As cavity dwellers, they are threatened by exotics like the European starling and the house sparrow, who like to steal their nest sites. In this picture the male stands by with a dragonfly while the mother feeds another dragonfly to one of the chicks. Notice her foot is in the mouth of the other chick.