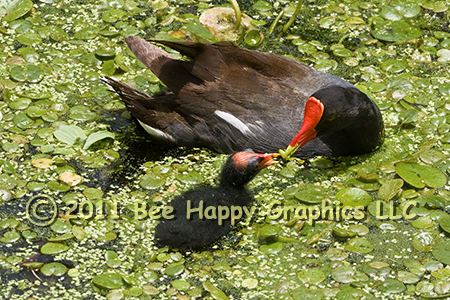 In 2011, this bird was split from the common moorhen (Gallinula chloropus) into its own species and is now called the common gallinule (Gallinula galeata). It took a few years for everybody to get the word. There are still four subspecies of the original common moorhen, all living in the old world.

We were on an expedition to Wakodahatchee Wetlands and Green Cay Wetlands, both man-made wetlands and water reclamation facilities for the county, and both wonderful spots for photographing birds. In mid-July, there were plenty of common gallinule chicks like this one, as well as the young of many other species. Although sometimes it appeared that an older sibling would care for the babies, this one was sticking close to its parent.