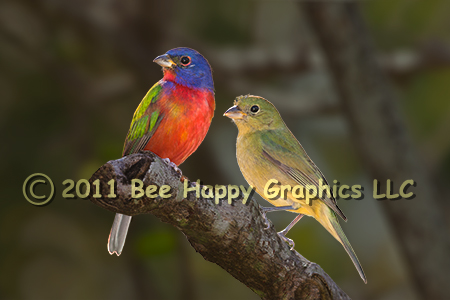 This picture was taken right in our own front yard. Painted Buntings (Passerina ciris) are small birds (about 5½ inches) that have shown a significant decline in population over the last thirty-five years. The Atlantic coastal population breeds from North Carolina south to central Florida, and winters in southern Florida. They are shy birds that like low bushes and eat mostly seeds and insects. The bird on the left is an adult male, while the female (or immature male) is on the right.

Several visitors to our booth have remarked how unusual it is to see the male and female next to each other like this, but Nancy has been reluctant until recently to admit that this was a composite. These are consecutive photographs. The male was captured first and the female was captured about two minutes later. Their positions on the branch were as shown so that no fancy editing was required.

For another painted bunting image, go to: Male Painted Bunting.

We used to have a different numbering system for prints on fine art paper than for print on canvas, as described in our blog post We’ve Changed Our Numbering System Again. For the Painted Bunting Pair, the consolidated numbering system began at #23 (after 14 paper prints and 8 canvas prints had been made).