Nautical Twilight In The Glades 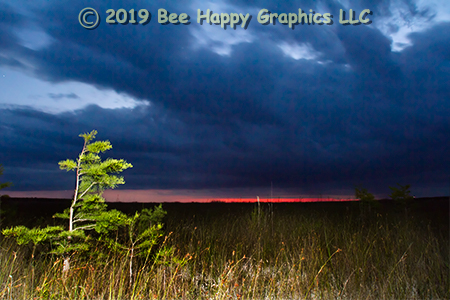 This photograph was taken near where Old Ingraham Highway meets the Gumbo Limbo Trail, between the Long Pine Key Campground and Anhinga Trail, south of Research Road.

According to the 500 Ruleexplained, stars start to elongate with a shutter speed longer than 21 seconds when using a 16 mm lens (with a crop-sensor camera). Because of the darkness, this image had a 30-second exposure, but there were few stars visible.

For more information, check out Midnight In The Pinelands, which was taken the night before.

Three different parts of twilight have been defined, based on how many degrees the sun is below the horizon (in multiples of six)defined. The first one after sunset (and last before sunrise) is called civil twilight, which extends from the time the last bit of sun dips below the horizon until the center of the sun is six degrees below the horizon. During this period, one can usually see pretty well without artificial light, but only the brightest stars and planets can be seen with the naked eye. During nautical twilight, which takes the sun's center from six to twelve degrees below the horizon, the horizon is still visible as well as most of the larger stars, both conditions critical to navigation at sea (until fairly recently), hence the name. During astronomical twilight, only the dimmest stars and galaxies are hidden, and when the sun drops to 18° below the horizon, it is officially dark. The fastest the sun can travel those six degrees is on those days in which it passes directly overhead (when you are somewhere within 23° of the equator, depending on season). Then each of the three twilights lasts about 24 minutes. As one's latitude increases and the angle of the sun's trajectory with the horizon decreases, the time of each twilight will increase dramatically. In the contiguous United States, people commonly use thirty minutes as an approximation for that time span.

This photograph was taken 45% of the way through nautical twilight. Photographic details: Canon EOS 7D camera w/ EF 16-35 f/2.8 L USM autofocus lens set at 16mm. Flash was used. Camera was on f/16 for 30 sec at ISO 800. Exposure was increased one stop in post-processing.