Our last big photography trip was a return to Antarctica the March before last with our favorite tour group, Cheesemans’ Ecology Safaris. The focus of this late-season trip was whales, although we did see four species of penguin, four or five species of seal, and other wildlife. We even had a few internationally recognized whale scientists aboard conducting research. The krill was apparently rather deep at the time and the whales were feeding at night, so we didn’t get to watch the humpbacks coming straight up through the surface of the pink water with their mouths open and throats ballooned out feeding. We did putt around Wilhelmina Bay in the Zodiacs looking for different photo opportunities. Mostly the humpbacks were “logging”, which is not an action verb as it would be for humans - it refers to a whale sleeping on the surface, floating like a log. Occasionally a whale (or small group) would take interest in us and more interesting interactions would develop.

For those of you who might find yourself motoring in a quiet bay in the company of whales, similar to what has happened on three of our Cheeseman trips, I’ve compiled a list of the best or worst angles from the sun to get a particular type of shot. Remember, photographers, “it’s all about the light” so all angles are bearings in relation to the sun, not magnetic or true north. In this list, an angle of zero means you are looking directly into the sun, while an angle of 180° means the sun is at your back. In the following discussion, we will box the relative compass, starting with zero degrees. 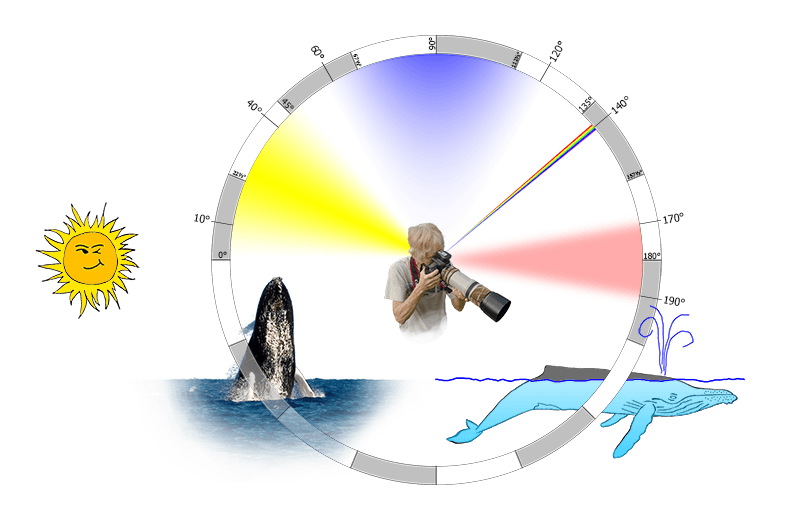 In my mind, zero degrees, or looking directly into the sun, is probably your worst angle for a shot. Your subject, which is ordinarily shades of black - making it hard to get detail, will be a silhouette with a bright golden sun reflecting off the ocean. The good news is that when the whales breathe, their blow will be backlit by the sun.

The ill effects of the direct sun will diminish fairly rapidly as you point away (in as little as ten degrees), and the blow will continue to be prominent for up to around 40 degrees as you move away from the sun, meaning you can get a nice blow and still get some detail on the whale.

Due to an oversight by technical support (yes, that’s me), we didn’t have our polarizer filter on this last trip, but here’s what you should be able to expect: its most dramatic (darkening) effect on the sky will be around 90° from the sun, but should be very high from about 60° to 120° from the sun. The anti-glare effect on the water occurs at all angles, and depending on the water visibility, could give exceptional results.

The requirements for seeing a rainbow in the blow of your whale are very specific; the blow needs to be 140°footnote from the sun (±1°). If your back is to the sun, the whale would be a tad more than halfway from directly to your side (call this the 9 o’clock position) to dead ahead (which would be 12 o’clock). OK, call this about the 10:40 and 1:20 positions, if that helps. These two angles are for the positions of the ends of the giant arc, most of which will not pass through the blow of the whale and therefore will not be visible. Expect whale rainbows to be small, tightly localized segments.

Probably the second worst, but still entirely adequate, would be 180 degrees. Shadows would be minimized, giving the subject less definition, but the light is even and details should be visible. Glare should be minimized. Don’t put your camera away, because any interesting whale behavior (breeching, fin slapping, etc.) would clearly outweigh these minor ‘complaints’.

I only discussed from 0 to 180° because the sun can’t tell left from right. If you actually brought a compass on your morning sortie, and say the rising sun would be bearing about ninety degrees magnetic (this is a reasonable estimate for the Silver Banks north of the Dominican Republic, but in Antarctica it is much more variable and dependent on season), and were looking for blow rainbows, the whale would have to bear 90° + 140° = 230° on the compass (which would be slightly to your left as you faced away from the sun) or 90° - 140° + 360° (to keep the angle between 0 and 360) = 310° (which would be on your right).

I’ve put this information and the illustration on a .pdf file which you can download. Then you could print one part or the other, or even print the picture on one side of your paper and the article on the other, and maybe even laminate it if you find it useful. Enjoy!

You can contact us if you have any questions.  If you find errors or have suggestions for improvement, please hit the Comment Button below.

As any source will tell you, a regular (rainwater) rainbow would actually be between 138° and 140° from the sun, but salt water has a slightly higher refractive index, which makes a slightly smaller rainbow. The difference is about 0.8° on each side.                 Return to "The Rainbow" section.